In Brownsville, Texas, many vessels remain tied to their docks during the height of this year’s shrimping season.

For the fishermen he represents, the situation is an emergency that transcends ideological battles on immigration: It’s a simple matter of survival.

“You have a choice,” he says. “You can leave the boat tied up and end up losing your business, or you can work with the system to hire a legal H-2B worker to work on your boat.”

“The fact is that American citizens simply aren’t willing to do the work.”

Due to a federal court order, USCIS has resumed accepting requests to renew a grant of deferred action under DACA.  Until further notice, and unless otherwise provided in this guidance, the DACA policy will be operated on the terms in place before it was rescinded on Sept. 5, 2017.

Here's a thread with the profiles of some of the political prisoners the Maduro administration sent home last night — Get an idea of who can be considered a threat by the Venezuelan government. https://t.co/gbtuKl10NW

“Imposed prosecutor general Tarek William Saab and chief justice Maikel Moreno announced that prosecutors and courts had been ordered to comply with the ANC’s decision and proceed to release a group of political prisoners with precautionary measures. I’m always willing to mention Saab’s huge syntax mistakes, which make him reveal truths, such as his tweet summarizing yesterday’s decision: “The truth commission (…) will continue reviewing the applicable cases, linked to the political violence that broke out in Venezuela in pursuit of national reconciliation and peace,” in other words, the prosecutor recognizes that the goal of protests was to achieve reconciliation. In any case, both did their best to show how the Executive Branch controls the public apparatus, without independence or autonomy.”

He may have just parted this world, but Tom Petty’s song ‘Refugee’ should always be a powerful reminder for refugees and asylum seekers that although you may indeed be a refugee or an asylee, that:

“Since the court’s ruling, ICE appears to have ramped up its efforts to make the lives of Iraqis in custody so unbearable that they will ‘voluntarily’ sign away their rights to reopen their immigration cases or pursue asylum,” the ACLU explained. “The Iraqis have been singled out and denied food, water, and access to the restroom.”

Source: ‘You Iraqis are the worst’: ICE accused of torturing detainees at private prisons In an important decision, the Supreme Court ruled unanimously today that an immigrant cannot be stripped of citizenship for making minor misstatements. In the case of Maslenjak v. United States a woman who lied about her husband’s immigration status during an interview with the United States Citizenship and Immigration Service (USCIS) was stripped of her citizenship.

What is a refugee? What is the difference between a refugee and a migrant? See @hrw's Refugee 101 #WorldRefugeeDay pic.twitter.com/I15IC1tIYg

"Why don't the refugees go back home?"
Because there is no home to go back to.#WorldRefugeeDay #Syria pic.twitter.com/Y7LSRFbSv0

This #WorldRefugeeDay our thoughts are with the world's 22.5 million refugees—half of whom are kids. May you find a safe and welcoming home. pic.twitter.com/x19MAmo8u5

The new administration dead set on removing Cubans to the communist island despite decades of prior protection and paths to legal status.

Blanco’s wife, Shelly, said that both Florida Sen. Marco Rubio and the family’s congressman, Rep. Neal Dunn, have told her they are trying to gather information on the case. Both men are Republicans.

Colorado Gov. John Hickenlooper, a Democrat, pardoned another Cuban immigrant for an armed robbery committed 19 years ago, in an effort to stave off his deportation. Rene Lima-Marin, 38, arrived as a toddler in the boatlift and 20 years later received a deportation order after his conviction.

Apart from the Mariel list, Cuba has agreed to review deportations on a case-by-case basis. Fifty-seven Cubans have been deported since October, while 335 were arrested between Jan. 22 and April 29. 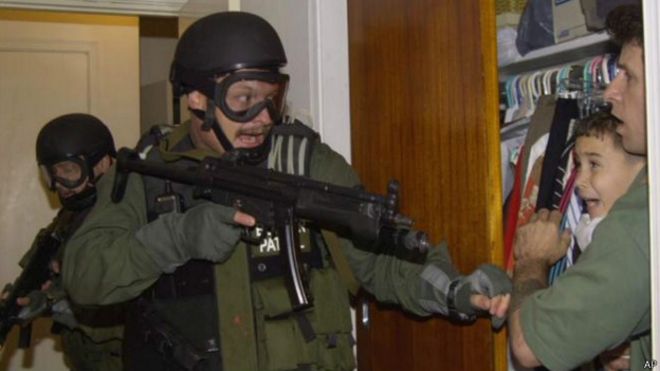 “This six-month extension should allow Haitian TPS recipients living in the United States time to attain travel documents and make other necessary arrangements for their ultimate departure from the United States, and should also provide the Haitian government with the time it needs to prepare for the future repatriation of all current TPS recipients,” Kelly said. “We plan to continue to work closely with the Haitian government, including assisting the government in proactively providing travel documents for its citizens.”